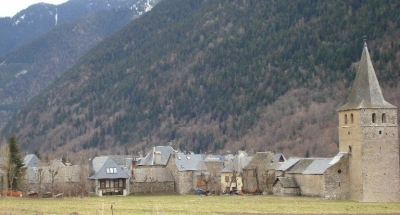 Garos is the first village of the High Aran which is crossed by the Camino Real (Royal Path) at one of its most interesting points because at its entrance behind the San Julián church there is an important site with Paleo-Cristian remains. Its ancient necropolis has been inspected the in the past years. It is said that during centuries the important squared tower of the church jealously guarded a 3 meter long skull with holes. Oral tradition says it was the skull of the Mandronius Giant that had fought in Betlan against the Roman invaders.