How to reach Baqueira 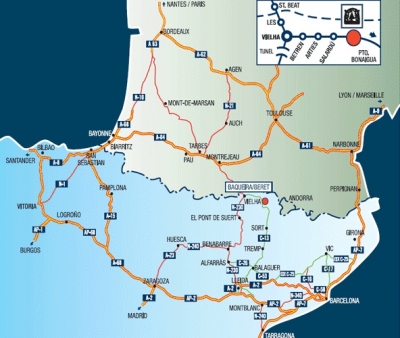 How to reach Baqueira

How to reach the Aran Valley

Reaching the Aran Valley can be done through all known means: car, bus, taxi, train and plane. What happens is that in the last mentioned (train and plane) are not directly reaches the valley, but the destinations are nearby cities. Now from there, you have to use the taxi, rental car, bus line or even helicopter.

There are access roads cuantro the Aran Valley to be chosen according to the point from where you depart:

a) If you exit the Pallars (through Bonaigua port) use c -28 highway that runs through the Aran Valley. They are 48 km which will take us to the border that carretra Pont de Rei.

b ) Through Vielha tunnel, which is usually the busiest access. This tunnel measures 5173 km.

d ) From Bagneres de Luchon. Portilló You pass through the French highway N -125 which leads to the N-141 and from there to Bossost.

There are also different lines leading to the valley from Tarragona, Zaragoza, Valencia and Madrid.

From the bus station Vielha no lines connecting some villages with the Aran Valley.

The Aran Valley has no airports but do have some neighboring cities that can be reached by this means. From there you can combine the trip with other access roads. The nearby cities with airports are: Tarbes, Lleida, Pau, Toulouse, Zaragoza and Barcelona.