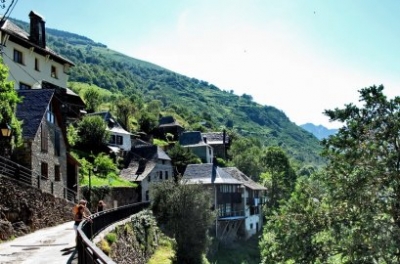 The valley through which passes this tour is one of the most interesting and beautiful of the Aran Valley. This is an easy way to do with a height of 360 m which takes about 1 hour and 40 minutes. It is through an old road linking the three towns , typical for its constructions of houses Aran . These three beautiful towns with typical houses Aran . The scenery is spectacular with us , with striking foliage composed of different types of trees ( linden, ash , oak, maple and cherry ) and various shrubs including brambles and wild roses that bring color and variety . A wonderful view awaits us in the gazebo that stands about Lana and I was shown the majestic massif Maladeta in contrast to the forests of beech, fir and black pine delvalle the other side of Aran , back in the gentle slopes the Monlude .

It is not uncommon to hear the colorful songbirds as Grouse and even deer snoring courtship ceremonies .

Porcingles is our starting point , from there once passed a measure that puts GR -211 , we turned left and started to flank the mountain. Once we crossed Canejan reached until we found a stone path and a drop of 300 meters along the coast of Canejan . Pass by a trough and a " santet " and from there find the " bocard " and houses that matched the area's mining past . Finally the road finally leads to the path , the people of Pontaut .

It is interesting to note the importance of this area mining had previously getting to have up to nine cores of population , this number being halved today. It also highlights the peculiar fact that he was smuggling passageway.