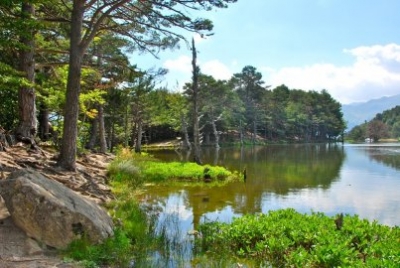 A beautiful place worth visiting in the Aran Valley is the Bassa d'Oles . It is around a lake bordered by red pine , spruce , beech and blueberries. The nature is at its best, constituted by a symphony of colors and sounds. You can find a large number of species of songbirds , including the cuckoo and even some early riser have seen the majestic image of privateering . To get there from Vielha through a paved road across the stunning Varicauba Bosc, Road leading Artiga de Lin also through Batalher Plan and Betlan Guardadèr.

Once you arrive , there is a path that skirts the lake and certainly very interesting for the hiker . The duration of this tour can range about fifty minutes no difficulty and is ` a real treat for nature lovers . Parking is part of the Bass d' Oles and upon arrival to the shelter Piusa dera is a typical Aranese house, take the left direction . Here we see a yellow and white markings PR that indicate the beginning of a forest trail . We continue our journey through the track in which we must do two increases until it reaches a fork leaving " dera Vila overboard " on the left . From there we followed a rocky path and cross meadows and some cabins , including one that stands out to be rehabilitated and should have it as a reference point in the turn . We continued until we reached a place where you can see a breathtaking view . From there we return retracing our steps to the cabin above. Once we found this cabin the right and started the descent back across exquisite meadows to red lush pine forest where we find the track that leads to the starting point .