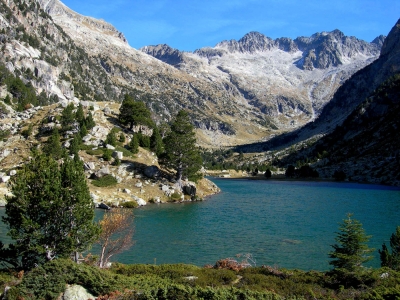 It is a beautiful ride on the National Park Aigüestortes that lasts about two hours and 15 minutes. It is considered a medium difficulty, through a path well drawn and with a vertical drop of 350m to tackle ( 1780-2130 ) . It is advisable to carry it out in the warmer months (May to October ) of the Lleida Pyrenees.

The starting point of this stage is parking near the dam of Cavallers . To access this point we do from the village of Boi . From there take the road of Caldes ( L -500 ) that will take us to the parking lot .

The path that we will follow is a path that moves the cattle grazing in the Aran Valley and is the path to follow these animals to pass through the port of Caldes . Our steps bordering the reservoir Cavallers , original reservoir nestled in granite walls . Here the vegetation is limited to small clusters of trees. The origin of this striking landscape was the former existence of a glacier and its erosive action .

Once we are in the tail of the reservoir , will begin a slight rise that will lead us to Planell Riumalo which is a spacious place famous among other things for being home to groundhogs , animals not only typical Catalan Pyrenees but all of these . Once located in the Planell , if you look to the left can admire the valley of Malavesina which marks the direction to raise the bulk of Balmes .

Then it goes through a rocky , full rounded by erosion surfaces where water is the highest art. This special place is called the Llastres of Morta , which contains the legend denomonación the death of a woman at that site.

Finally through a winding road we reach the goal of the route. This is the peg Negre , mysterious estany whose waters are dark and where clearly rebel glacial característas . This peg is next door routes such as the route of ascent Montardo Colieto or the valley . It can also be a source point to aim at the lakes that are situated at the foot of Travesany .